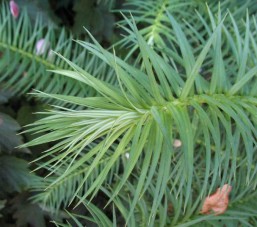 One of my favorite trees in the world has very little presence here in New Jersey.
A tree native to central and southern China, this tree has captivated my attention for
decades. A coniferous evergreen, this intriguing conifer has leaves that are spirally
arranged and is often confused with another conifer, Florida Gopher Wood, Torreya
taxifolia. Chinafir, Cunninghamia lanceolata has a presence up and down the Eastern
seaboard, with an outstanding example close to home.

Hidden on a private estate in Watchung, New Jersey sits a 30-foot specimen
accentuating all the finer points this tree has to offer. Well on its way to an
anticipated height of 60-70 feet, 150 feet in the wild, this pyramidal tree has slightly
pendulous branches giving the appearance of a rather exotic or prehistoric looking
tree. A medium growing conifer, the bark on Chinafir, is brown and peels off in long
irregular strips, exposing its reddish inner bark. Bright green to blue-green leaves
will weather to a bronze-green in our colder months. These softly spined, leathery,
stiff needles are 1-2 inches long. Two white or greenish-white stomatal bands
underneath and sometimes above on the foliage are a helpful plant identification.

“Hardy” in zones 6-9, I have seen magnificent specimens in Oregon, Florida (Disney
World) and North Carolina (the Biltmore Estate). The cones of this unique tree are
seldom seen solitarily, usually several together. Globose, pendent- shaped cones
have been likened to that of an artichoke. Chinafir, not a true fir by the way, is able
to tolerate excessive heat and drought and appreciates full sun to part shade. Being
mindful of avoiding windy areas and providing moist, well-drained, acid soil for this
tree contributes to its happiness.

The genus name Cunninghamia is believed to have come about honoring Dr.
James Cunningham, a British doctor and botanist Allan Cunningham who introduced
this species into cultivation. Incidentally, Allan Cunningham is also commemorated
in two other conifer families, Araucaria cunninghamii and Podocarpus cunninghamii,
both also having a flare for the exotic. A prized timber tree in China, Cunninghamia
produces soft, yet highly durable, scented wood similar to Coast Redwood and
Cryptomeria. “It is used in particular for manufacture of coffins and in temple
building where scent is valued” (Wikipedia). House building, indoor carpentry,
masts and planking are all solid uses for this wood as it is extremely rot resistant.

The genus is traditionally said to contain two similar species, lanceolata and
konishii, however molecular genetic evidence suggests they are the same species.
There are a few noteworthy cultivars to seek out if I still have your attention.
‘Glauca’ is said to be more “hardy” than the species. Unique waxy deposits on its
needles displays a more prominent bluish hue. Expect heights of 50-60 feet tall and
about 30 feet wide on this one. ‘Chason’s Gift’ is a more compact, conical-pyramidal
type with glossy dark green leaves. Introduced by Johnson’s Nursery in North
Carolina, this beauty has a strong central leader at a young age and will need plenty
of room to grow as well. Cunninghamia konishii ‘Little Leo’ is truly a rare, unique
gem. This slow growing, dwarf conifer from Australia forms a round, flat bun of
short, dark green needles. Purplish-bronze markings are prominent throughout the
winter. An excellent candidate for trough or rock gardens, this little gem will
appreciate being kept out of harms way, winter winds. As with all other Chinafir
types, well-drained soil is key to its success. Prune out any branches with faster
growth to maintain a tight bun shape.

Perhaps one of the most fascinating qualities of Cunninghamia is its ability to
resurrect itself. Large specimens that have been cut down flush to the ground have
reportedly resprouted with vigor within a few short years. A clever designer can
architect thoughtful and inspirational design with this tree. Imagine, if you will,
mixed in between two deciduous conifers Baldcypress, Taxodium and Dawn
Redwood, Metasequoia glyptostroboides. Trees that have been around for ages, used
hand in hand with Chinafir help define a prehistoric park in Disney World’s Animal
Kingdom. An awesome sight where plants were selected and used brilliantly. Finally,
it has been suggested that Cunninghamia’s gray-blue needles, on certain cultivars,
could rival or even surpass the best blue spruces on the market. While I do not
totally agree with that, I will say that this would be a gorgeous alternative to
brighten up your landscape and a fine candidate to add to your deer resistant plant
list too.